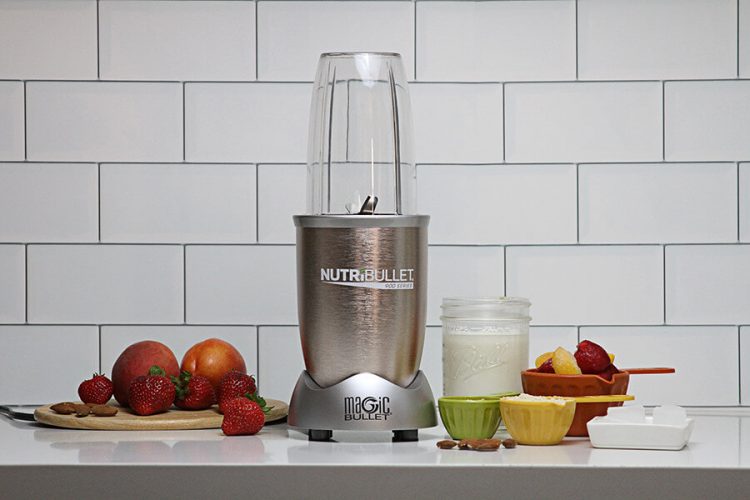 Whether you’re searching for your very first personal blender or you’re replacing an old one, no doubt you have heard about the NutriBullet or the Magic Bullet. Perhaps you’ve even heard of both. Both of them are highly recommended by happy users, but they seem so similar, so what could the differences between the two be? And how will that affect your decision?

In this article, I aim to not only list the differences between both the NutriBullet and the Magic Bullet personal blenders, but to expand upon the Pros and Cons, their price points, and more. By reading this article, you’ll be well on your way to deciding which one could be best for you!

In case you’re new to the Bullets, I shall describe just what exactly they are. Both the NutriBullet and Magic Bullet are small, powerful personal blenders. What is a personal blender, you may ask? It’s a delightfully tiny blender that takes the guesswork out of making a perfect single serving. Their small stature but powerful motors can make preparing single-serve smoothies a breeze.

So, if you’re in the market for small, perfectly proportioned blenders, then you’ve come to the right place! However, before we delve into their various differences and similarities, I feel the need to clarify that while there is only one version of Magic Bullet, there are actually several versions of the NutriBullet. For the sake of my own sanity, I will only be using the NutriBullet 600 for comparing purposes against the Magic Bullet, rather than the entire warehouse of Bullets.

With that out of the way, we should first look at their similarities, of which there are a few important ones to note.

Similarities Between Magic Bullet and NutriBullet 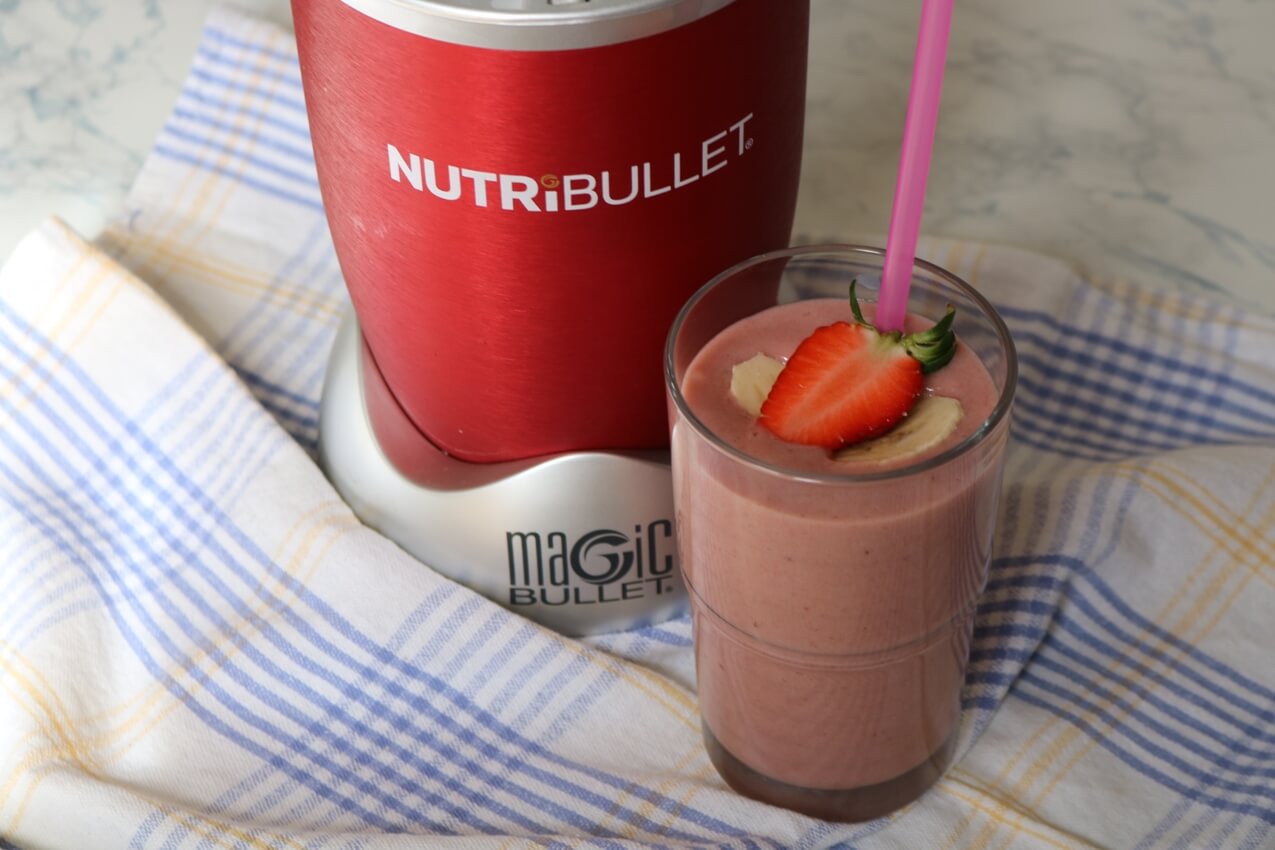 First and foremost is that they’re made by the same company, and thus share the same site. Which, luckily for us, makes it much easier to compare the two.

Both the NutriBullet and the Magic Bullet blenders have a wide variety of uses and features. They both have the capability to blend, puree, crush, and mix up a variety of ingredients and produce. They both also have a special sharp flat blade that is not only made for whipping up things like whipped cream, but also grinding slightly tougher things like nuts, seeds, and coffee beans. Now that’s some nice versatility in an itty-bitty package!

They both have a small stature, making them perfect counter companions that don’t take up the whole kitchen. They store easily, even in the smallest kitchens, and they are even portable for on-the-go smoothies.

Their small size is also perfect for making a nice single serving of whatever it is you’re going to make. Gone are the days of making too much and wasting food! In case you don’t like their default cup size, they also have optional bigger cup sizes to choose from.

In case your Bullet comes in faulty or is missing something it should have, or even breaks suspiciously too early, then both have a nice one-year warranty.

NutriBullet Vs Magic Bullet: What’s in the box?

Perhaps while you were looking at the Magic Bullet and NutriBullet, you may have noticed that they seem like they come with extra items, and not just the blender itself. Sometimes the pictures can be confusing and the reviews misleading. If that’s the case for you, then let’s cover what each one comes with to help clarify.

The NutriBullet 600 comes with five things.

Even though the Magic Bullet appears to come with more things, both have some optional add-on items you can purchase separately to further expand your arsenal of utensils for making tasty things.

Quality and durability: Which is tougher?

I’m not suggesting you start blending up rocks, or even strapping them to robots and watching them duke it out to determine the strongest. All that will accomplish is worried onlookers and broken appliances. What I am going to say, though, is that we’ll be comparing the two for how much normal usage they can each take daily.

The Magic Bullet came first. Currently, it is made with a strong stainless steel base. They had a less-than-ideal run when they first came out, though. The older blades could sometimes chip and fall apart, even after just a few uses. That was a mess and certainly didn’t earn the company any favors. However, after some more testing and much-needed improvements, they have increased the durability exponentially.

While using anything every single day can cause more wear and tear than, say, using it once or twice every week, the Magic Bullet has been said to handle daily use fairly well. Considering it’s still on the market and has gone through significant improvements, it’s safe to say it’s worth the money and people are generally happy with it.

The NutriBullet doesn’t have a stainless-steel base like the Magic Bullet does, but it does have a strong, high-impact-plastic base. I know what you’re thinking: Plastic? Yuck! However, that doesn’t mean that the NutriBullet is more fragile. In fact, with today’s better plastics, they are generally sturdy and reliable machines. They have a decent chamber capacity, and they can blend up some pretty tough things with the best of them.

That said, the NutriBullet wasn’t made for daily use, and it has been advised by nutritionists to go easy on it every now and then to prevent some unwanted premature breakage.

Blade capabilities: which is the strongest?

Before you say that I already wrote about this, toughness and strength are two different things. When I say “strongest”, I mean the power of the motor, the blades, and how easily they can pulverize ingredients, not the durability overall.

While both the NutriBullet and Magic Bullet might not be as powerful when compared to a full-scale blender like the Vitamix, they weren’t exactly made to be compared, to begin with. As far as their small statures go, they actually have more of an oomph than you’d expect from something of their size.

But which of these two specifically is more powerful than the other? That’s actually answered relatively painlessly. In terms of sheer motor power, the NutriBullet takes the cake. With a higher 600-watt motor, it blows the Magic Bullet’s much lower 250-watts out of the water by 350 watts.

So, if you’re looking for a personal blender with that extra oomph, the NutriBullet has the upper hand over the Magic Bullet.

Yet, sometimes you don’t necessarily need the most powerful machine you can get your hands on. For instance, let’s say that you only plan on blending up soft, easily pulverized things like some fresh berries, or you plan on making something that doesn’t particularly need to be perfectly smooth, like salsa. Then perhaps the Magic Bullet would actually be more beneficial overall, as the slower motor of the Magic Bullet would make it easier to tell when you need to take your food out before it gets liquefied.

If you plan on using your blender only for softer things, making creams, or chunkier things like salsa, then the Magic Bullet has got you covered.

NutriBullet Vs Magic Bullet: which is easiest to clean?

Cleaning and sanitizing can be something people tend to overlook. The ability to clean your device with ease shouldn’t be ignored, however. If you plan on using your blender very often, then having to do crazy gymnastics or complicated puzzles with it just to get it clean would very quickly become tiresome.

According to the NutriBullet site, all of the cups and their lids can be hand washed or are top rack dishwasher safe. They say that the only parts that should never go in the dishwasher are their motor bases (hello, electricity), and interestingly enough the blades. This may be because they’re considered fragile while not attached to the machine, but it may also be due to the harsh environment inside a dishwasher. All that super-heated water and scrubby detergent aren’t good for some types of kitchen appliances or utensils.

While both can be hand-washed or top rack dishwasher cleaned, sans blades and electric parts, which one is ultimately easier to clean?

The Magic Bullet and most of its parts are smaller than the NutriBullet, which means less surface area to clean, but both have the weirdly angled blades that can be a pain to get all the food out of. The blades are especially hard to clean when you add in the fact that you aren’t supposed to just toss them into the dishwasher and forget about them.

If you’re having trouble getting something out from the blade’s danger grip, some people claim that higher pressure water or small brushes like a toothbrush can be used to remove hard to reach gunk.

So, fun fact: both are about the same when it comes to difficulty in cleaning. I guess you could say that washing the NutriBullet may take a tad longer because of the larger cup sizes, but tossing the cups into the dishwasher would mean the same amount of time had passed, though, so…

Price point: which one is worth the cost?

Of course, all of this would mean nothing if you can’t even afford to buy the one you want.

Something to keep in mind is that price points can change; sales, discount codes, buying one refurbished, and even price fluctuations can alter the overall prices of anything. Just because you can’t afford the one you want right now, it doesn’t mean it’s not going to go on sale in the future. It also works the other way. The price may not be too bad right now, but waiting too long could mean an increase in the price.

So, with all that jazz in mind, which Bullet costs more overall?

The NutriBullet costs more overall than the Magic Bullet does, but the cost just may be worth it. On the one hand, yes, the NutriBullet may seem more expensive. But on the other, you’re really paying for a wonderful little device that has years of life and uses ahead of it.

The NutriBullet has a stronger motor, is newer, and also larger than the Magic Bullet, which may explain the larger price tag.

The Magic Bullet is lower in cost than the NutriBullet, but does that mean its quality is lesser? Not necessarily. Over the years, the Magic Bullet has gone through many improvements that make it exceed the capabilities of other blenders of the same kind. This makes it a wonderful addition to your kitchen without breaking the bank.

While the Magic Bullet may not be as large, have a stronger motor, and is not as new as the NutriBullet, this does not invalidate it as a viable option. After all, it comes with more additional items than the NutriBullet does.

Again, even with all that said, the prices could have possibly changed by the time this article goes up, so always be sure to search around for the best prices before plunging into a new blender.

I don’t know about you, but I love a good pros and cons section in an article. They just really help if you want to compare things quickly and easily.

But the question still remains: which one will you take home as the winner by the end of the day? After all, the final choice between these two little kitchen buddies is all up to you. But no matter which one you decide to go with, either one can enrich your kitchen and lead you to a Vibrant, Happy, and Healthy life!