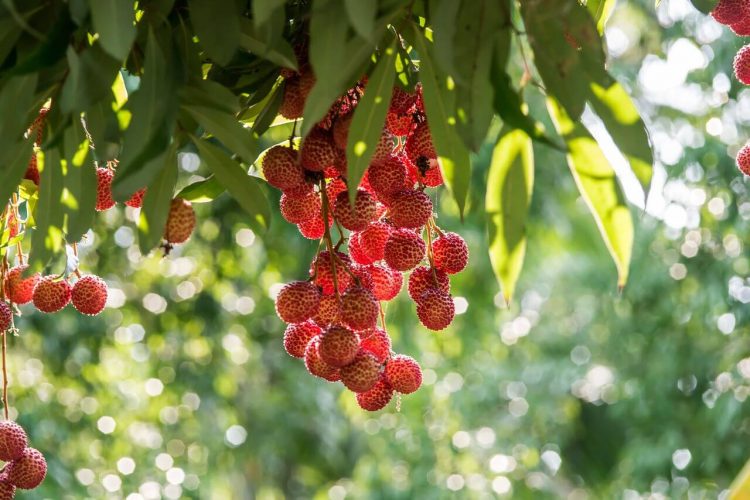 Perhaps one day you walked past some strange, creepy-looking things on your grocery run and wondered just what kind of creature you stumbled upon. But it turned out that it wasn’t an alien creature at all; it was clearly labeled as a “fruit”, somehow. Lychee or rambutan? They both look weird on their own, but what if your store has them both?

For someone who has just learned about their existence, it may be a little difficult to tell the difference between a rambutan and a lychee, or even to understand they actually are edible. These two exotic and intriguing fruits are definitely worth looking more into. In this article, I aim to explain the differences between these two strange delights to help you understand these odd, but tasty little fruits. And, of course, how they can help you on your journey to health and wellbeing!

What are rambutan and lychee? 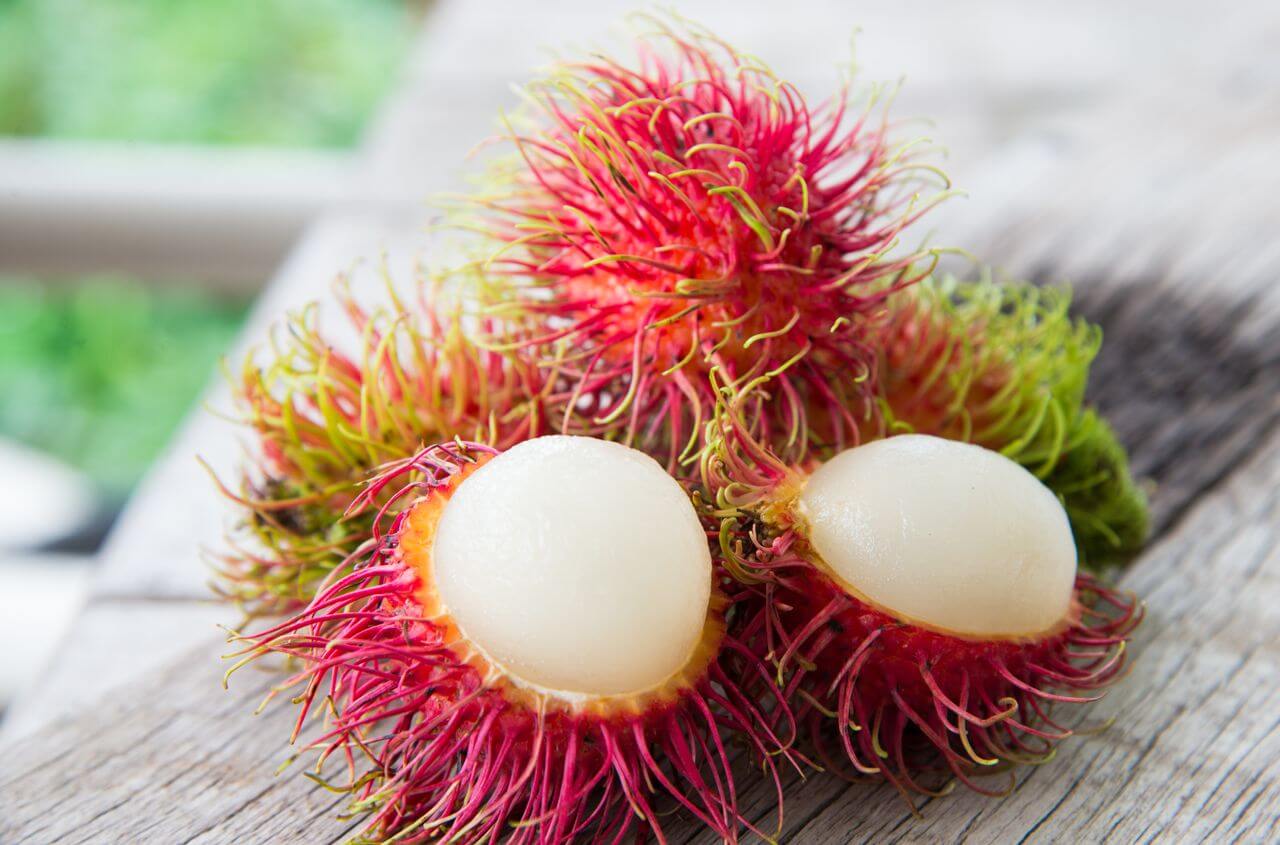 Before I list their differences, perhaps we should learn a bit more about just what exactly rambutan and lychee even are. Knowing these things may help you to discern their individuality at a glance.

Both rambutan and lychee are small tropical fruits. They both grow on trees that originate from areas in Asia. However, lychee and rambutan are from different parts of Asia, which helps explain their similarities and differences.

Rambutan originally came from both Malaysia and Indonesia. Lychee, on the other hand, is originally from China. They may be from different parts of Asia, but they were popular enough to eventually be cultivated in other tropical parts of the world and shipped all over. That’s why people in America and other countries can now find them in local stores.

Rambutan and lychee are both members of the Sapindaceae family, or more commonly known as the Soapberry. To be honest, this is my new favorite type of tree family, entirely because of “soapnuts” being a thing. But I digress…

Lychee has also gone by the names litchi, liechee, liche, lichee, lizhi and li zhi. Rambutan translates from Indonesian to literally mean “hairy”. I’m sure you can see why.

What’s the difference between rambutan and lychee? 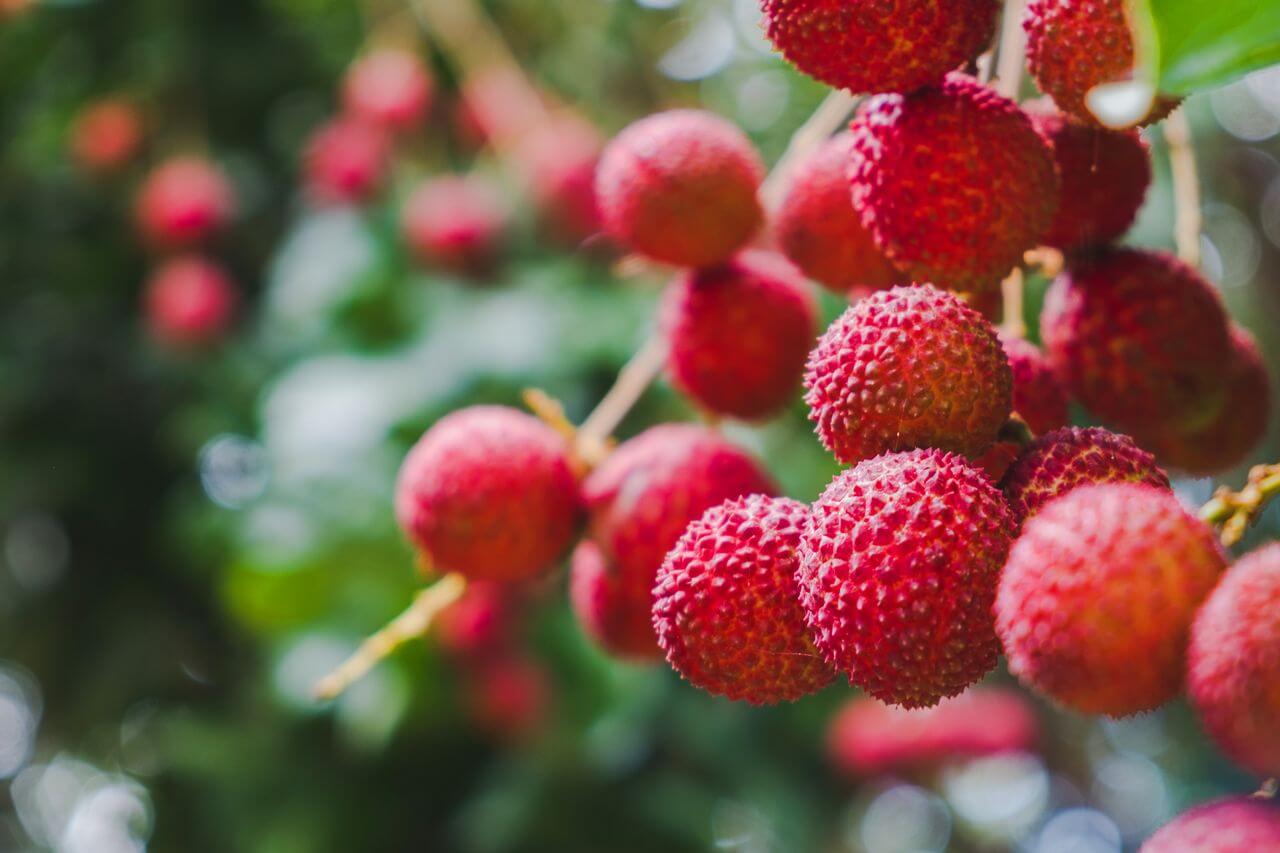 Rambutan and lychee are different fruits, so you probably don’t want to get them mixed up. They look similar, but different enough to tell apart once you know what to look for. But they have distinctive tastes all their own that would mess up your recipes if you got them confused.

The good news is that when you compare both lychee and rambutan together as whole fruits, they look and feel pretty different right away. It won’t take more than a glance or a quick grope to figure it out.

The rambutan is about the size of a golf ball. The shell is usually a bright red to deep red color. It’s really quite stunning to behold. The best part though is that it’s covered in long, green or red hairs or spines. These weird hair-spines make it a firm competitor for the grand tile of “Fruit That Probably Came From Another Planet”. Before you whip out some thick working gloves to pry open a tasty rambutan, you may be relieved to hear that these spines aren’t hard or poky at all. They are more like the soft plastic bristles you might find on a hairbrush. They are weirdly fun to hold, and I have spent entirely too long fondling these in the store.

The lychee is typically a light red or rosy pink color and a little smaller in size than the rambutan. It has small scaly bumps instead of spines, which makes it much lower in the running for the title of “Fruit That Probably Came From Another Planet”. The lychee’s shell is dryer and a little crunchy feeling compared to the rambutan. Think bumpy and rough chicken egg. Not as fun to hold as a rambutan, but great for hiding in your pockets if you want an odd snack for later that will really freak out your friends.

Speaking of eggs, the rambutan and lychee both have a soft, white, and watery flesh nugget on the inside of their weird shells. It’s akin to that of an exceptionally wet hard-boiled egg. They also both have a large seed in the center, very unlike a hard-boiled egg.

What are the health benefits of rambutan and lychee? 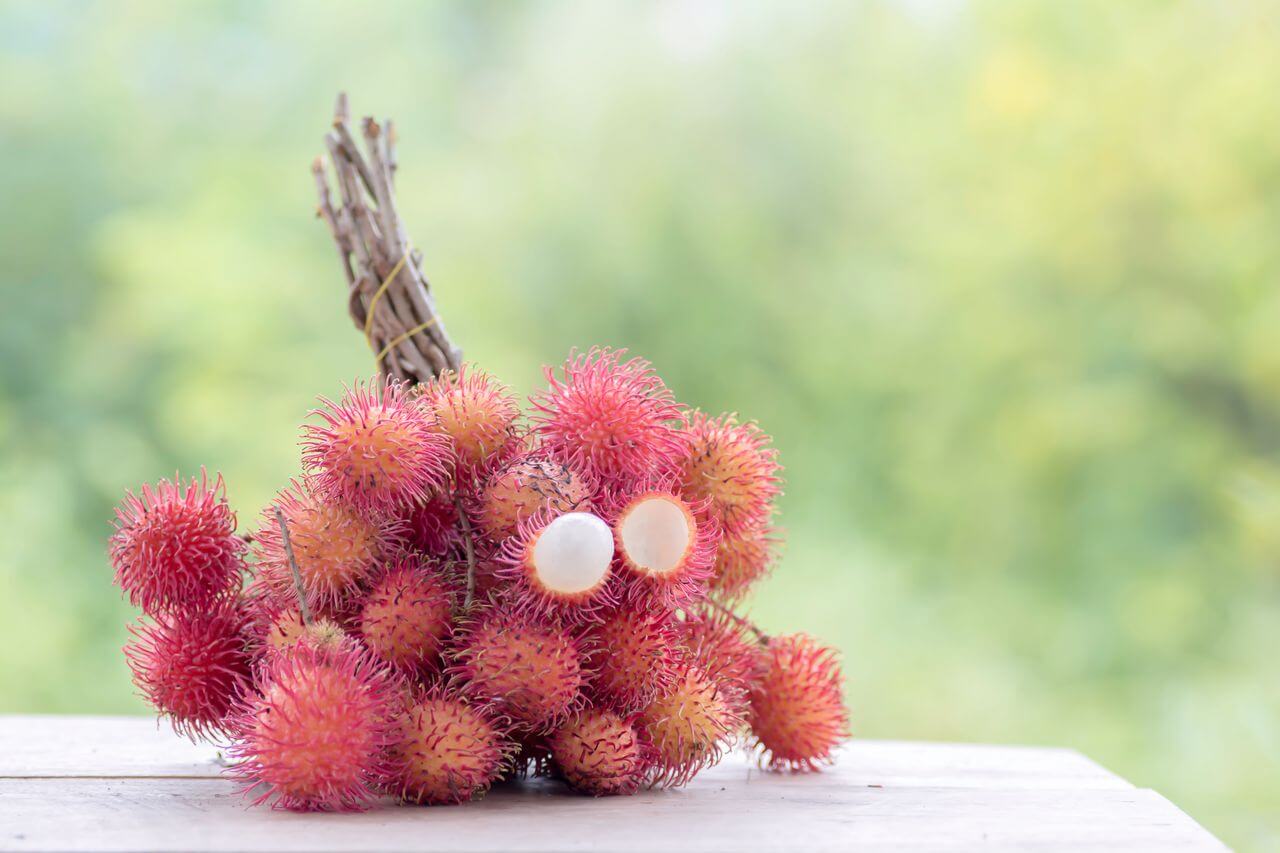 Both rambutan and lychee have similar health benefits, with only a few differences between them.

Both fruits have high vitamin C content per 100 gram serving. Rambutan has about 36.4 mg, and lychee has around 27.6 mg. Colds beware!

Both fruits also have a small bit of fiber to them. Rambutan has slightly more fiber than lychee, probably on account of being larger.

As far as fruits are concerned, these guys aren’t so bad. Just be sure to steer clear of the large seed inside of both, as it is toxic if consumed. While some people claim to eat them and be fine, even roasting them like pumpkin seeds, there hasn’t been sufficient scientific evidence showing that the seeds don’t have any long-term side-effects. Better safe than sorry, I’d say.

How are rambutan and lychee typically eaten? 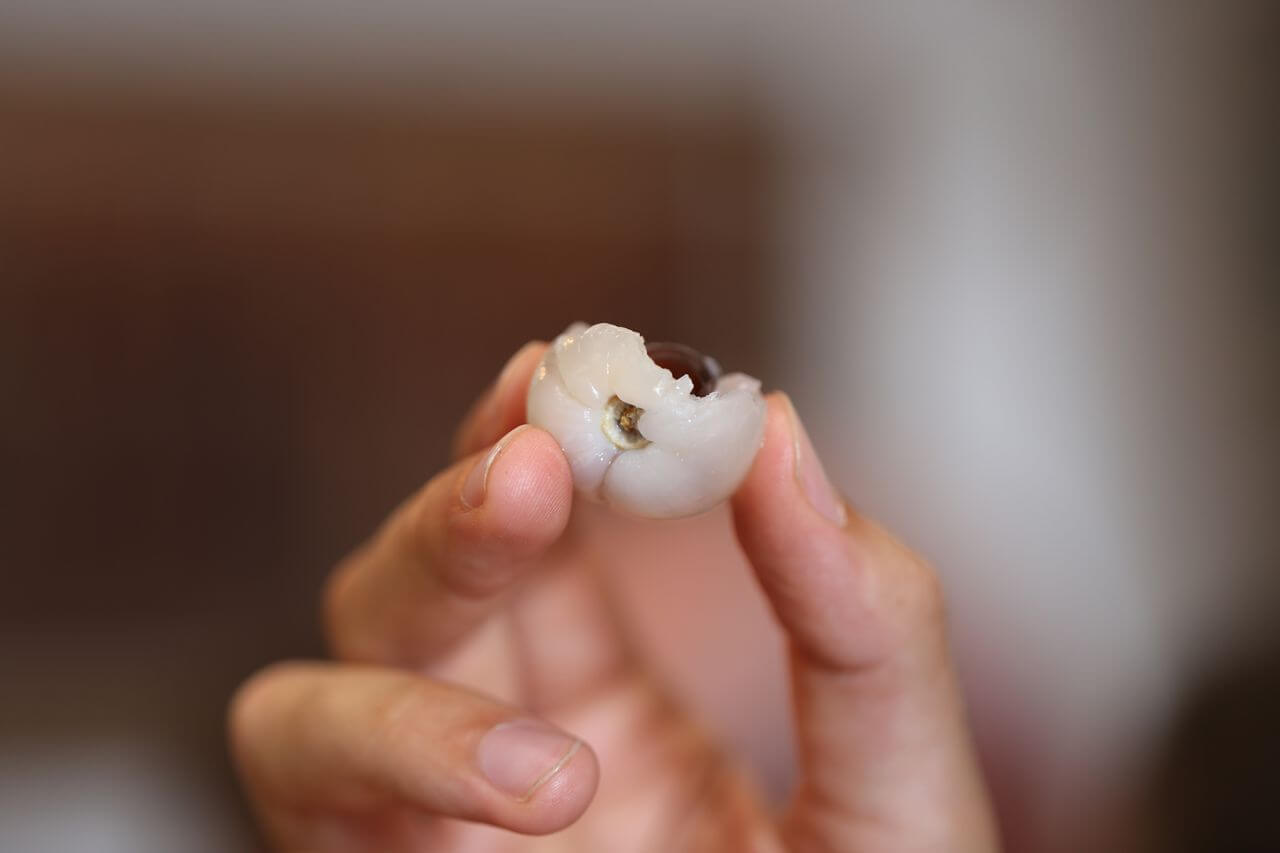 Before you get to eating these sweet fruits, you have to know how to open them. That is, if you bought them fresh and not canned. I probably don’t have to explain how to open a can.

Both of these fruits are perfectly edible fresh off the tree. Once you take the shells off, of course. Neither of their shells seem particularly enticing, but that may just be me. As I’ve said before, the seeds of both fruits are slightly toxic, and should not be eaten.

The shell of a lychee can be easily removed by cutting or cracking it open and peeling the shell pieces off. Again, much like an egg. This is a very egg-like food that is also somehow not an egg at all, which I guess is a good thing. You may also crack it open with a walnut opener if you don’t mind your walnut opener getting sticky.

The rambutan has an almost leathery shell that isn’t quite as easy to open as the lychee’s. You can open it by cutting a slit into it with a knife and popping the meaty part out, or poking it with a sharp pointy thing like a nail and peeling away the shell pieces.

After popping the fleshy bit out, you need to remove the seed. You can do this by cutting a slit into the flesh of the lychee or rambutan, being careful not to cut the seed. Something worth mentioning though, is that most fruits with seeds have either a clingstone seed or a freestone seed. A clingstone seed means that the seed clings to the fruit’s flesh like it’s a cat that doesn’t want to be picked up. A freestone seed means that the seed can kind off fall right out of the flesh, like I do in the morning when I try to get out of my bed.

If you’re of the legal drinking age, then I’ve heard that another way to enjoy these fruits is by plopping them into a cocktail. I know, this isn’t exactly the healthiest option, but they can add a nice flavor to your drink, and I figured I’d share. Both rambutan and lychee taste the same when mixed into a cocktail, which is interesting to note.

They are both also sometimes made into sweets, like candies, jellies, and more. My personal favorite is blending them into a sorbet. Refreshingly cold and tasty!

How can you tell the difference between lychee and rambutan flesh? If you bought lychee or rambutan shelled, like maybe if they were canned and you lost the label, then it can be a little difficult to tell the naked fruits apart. Just remember that they taste slightly different. If what you ate tastes sweet and creamy, it’s probably a rambutan. But if it leaves a little tartness, then it’s probably a lychee.