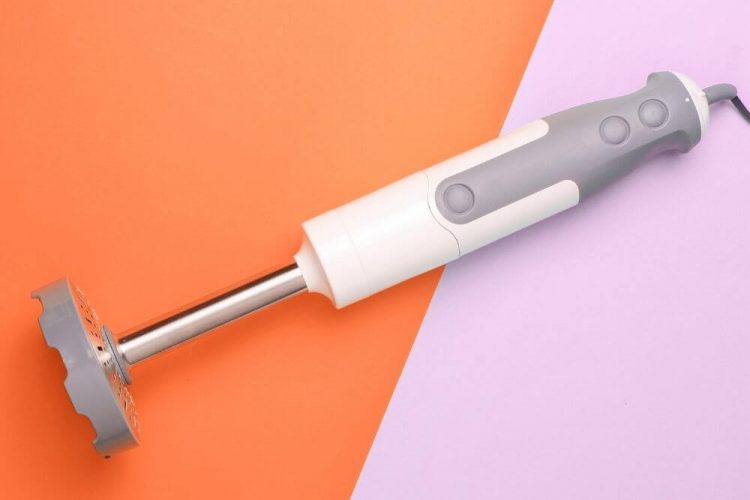 I’ve done the research and here’s what I found out.

There’s more to learn about corded and cordless immersion blenders, though.

Shortly, I’m going to explain why most hand blenders on the market are corded. I’m also going to show you the best cordless immersion blender.

Let’s dive deeper into the world of immersion blenders!

Why most immersion blenders are corded 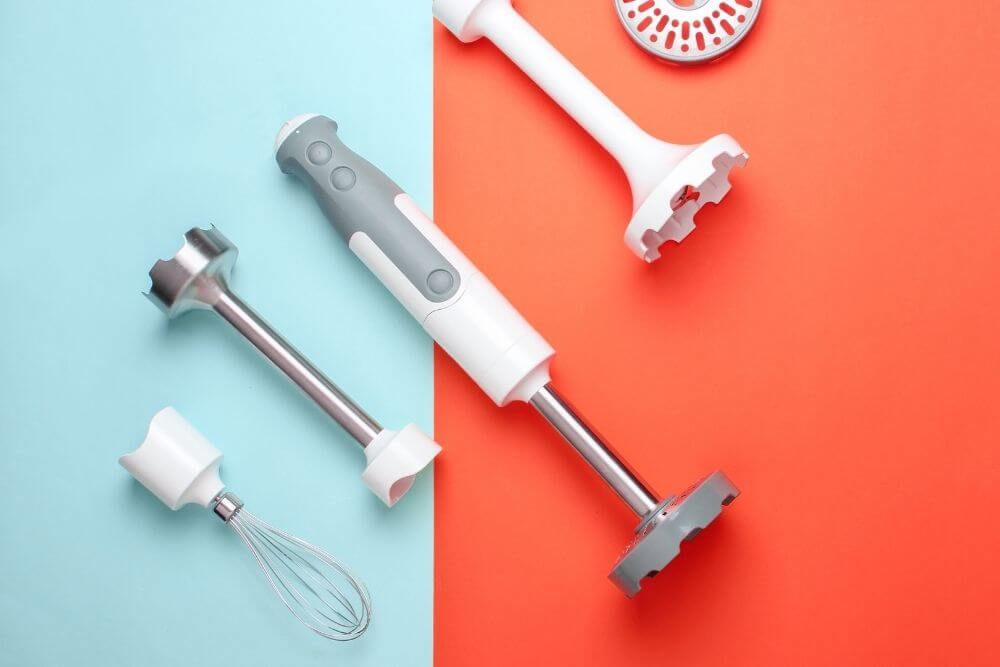 Also known as stick blenders or hand blenders, immersion blenders can be either corded or cordless.

It’s understandable why some people prefer cordless blenders, but both types of blenders have their pros and cons.

Keep in mind, however, that most hand blenders are corded and there’s a reason for it.

Cordless devices win here, they are so much more convenient!

You won’t need to plug them into a wall outlet to function. They offer optimal portability, as you can blend anywhere in your kitchen.

The downside to cordless blenders is that you’ll have to charge the battery often. You’ll get roughly 20 minutes of blending time after 2 hours of charging.

Most people choose corded immersion blenders because they’re more powerful than battery-operated ones.

With a corded immersion blender, you can blend almost anything. Some can even crush ice or frozen fruits, and make nut butters.

Battery-operated blenders, on the other hand, work best on softer substances.

Cordless hand blenders can be considered safer because there’s simply no cord that can get caught on something.

Should I get a corded or cordless stick blender? 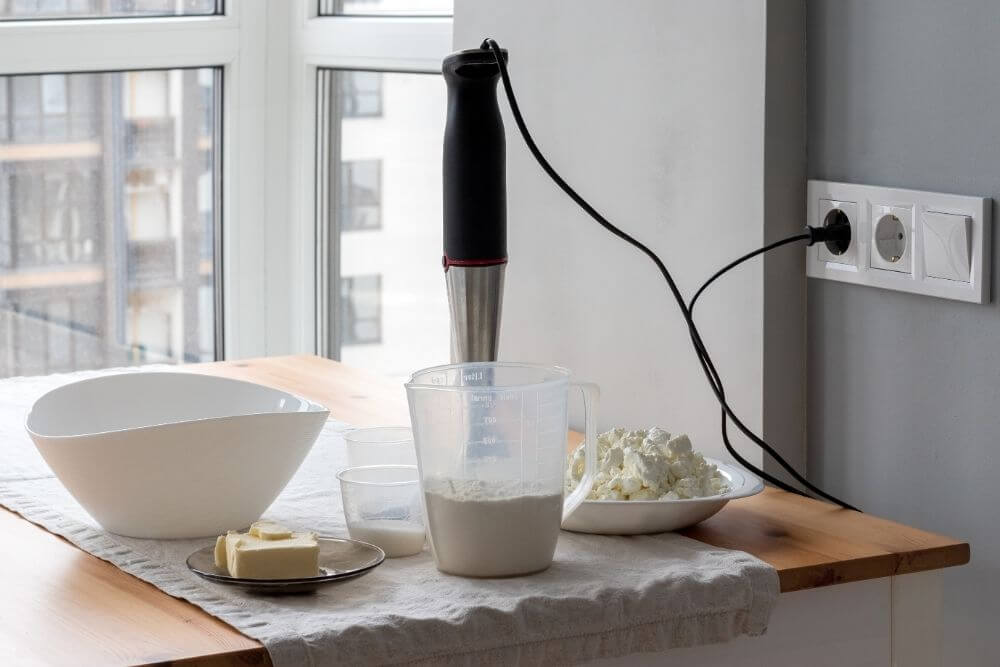 It really depends on your preferences. I only use corded blenders, because I have outlets everywhere in my kitchen. The cord doesn’t bother me at all.

But maybe you need more flexibility and a cordless blender is the best choice for you? Only you will know the answer.

Keep in mind, however, that if you’re deciding on a cordless device to get one with a strong battery and motor.

Most cordless blenders simply lack the power to perform even the easiest blending tasks.

Luckily, there are some models from trusted brands that blend almost as well as corded devices, but give you all the flexibility you need.

What are the best immersion blenders for home use?

If you want a cordless immersion blender, I’d go for a KitchenAid.

This KitchenAid cordless hand blender comes with a strong lithium-ion battery and a powerful motor, you can check it out here.

With a full charge, you could blend up to 25 bowls of soup. It charges from empty to full in 2 hours.

With a quick charge of just 20 minutes, you could make one delicious 16-oz fruit smoothie or puree a 44-oz hot soup.

The KitchenAid comes with variable speeds and has enough power for most blending jobs.

The hand blender I use

I have the Mueller Austria hand blender and I love it, you can check it out here.

It’s an affordable device that comes with several accessories and attachments like a measuring cup and a chopper bowl. The attachments are really useful and connect easily.

The chopper is like a mini food processor, so you can easily chop foods or make salsas.

The Mueller Austria lays great in my hands and offers plenty of power. You can choose between 12 different speeds or use the turbo boost for maximum speed.

This hand blender is just perfect for soups and sauces and its food processor capabilities are pretty impressive as well.

I don’t use it for making smoothies, so I can’t really comment on that. But I guess it could blend small amounts of frozen fruits or ice if you add enough liquids.

Do you really need an immersion blender?

Since I have my cooking blender (more about it here: are cooking blenders worth it?), I don’t use my hand blender quite as often, but it’s still a great tool for multiple purposes.

What are hand blenders used for?

Besides having a small size, and being easy to keep clean, immersion blenders will outperform counter blenders on some blending jobs.

An immersion blender is great for hot foods like soups, sauces, and purées.

Now, if a hand blender is so versatile, why would you still need a countertop blender?

Can an immersion blender replace a blender? 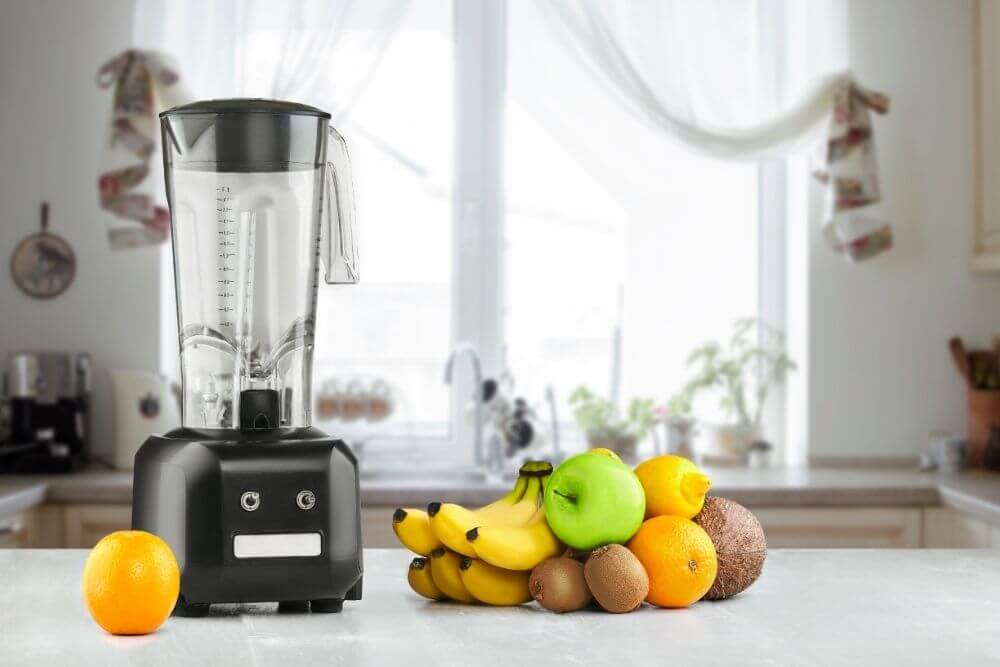 It’s true that an immersion blender is versatile and also easier to clean than its counterpart – a full-sized blender.

Hand blenders are also more affordable than regular blenders… except if you’re choosing a battery-operated hand blender, those can get pretty expensive too!

No, unfortunately, an immersion blender won’t replace a blender. A hand blender simply can’t do everything a blender can, but it does a few things better.

So, for me, it’s not a choice between one or the other, I want to have both in my kitchen.

While both have their merits, there are instances where one is better than the other.

Also, you can blend large batches in a relatively short time with a stand blender. You could blend larger amounts with a hand blender too, but it’ll a while and requires a lot of effort.

I usually use my hand blender for blending smaller amounts of food. Also, before I bought my cooking blender, I used it often for pureeing hot soups and sauces.

If you’re a fan of homemade soups, keep in mind that most counter blenders (especially the more affordable ones) aren’t designed to blend hot liquids. So, a hand blender is usually the better choice for soups.

Also, it’s super convenient to puree soups or sauces right in the pot with a hand blender, instead of having to transfer it to a blender.

Making smoothies with an immersion blender 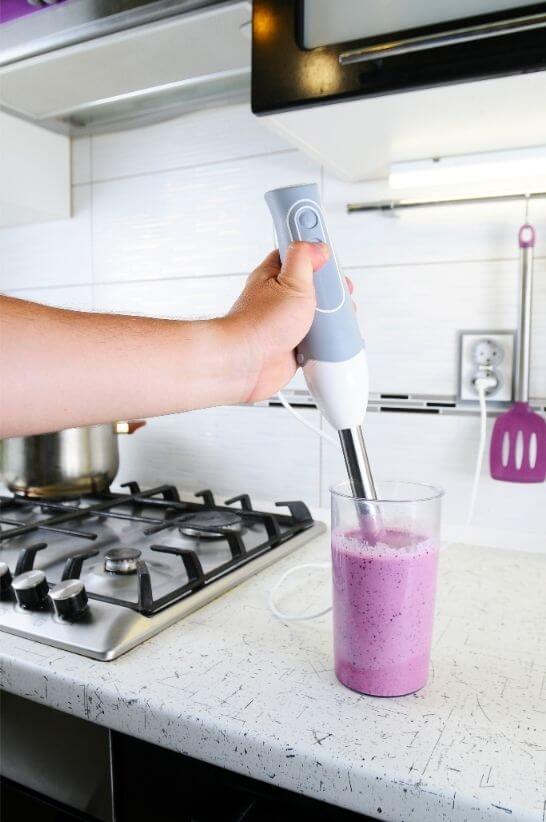 While it’s true that you could make smoothies with a hand blender, I don’t recommend it.

An immersion blender won’t be able to blend tougher ingredients as thoroughly as a powerful counter blender can.

You’ll end up with a lot of unprocessed chunks in your smoothies.

If you’re only going to make fruit smoothies without frozen fruits, a hand blender will do just fine, but it’ll still require more effort and time than if you’re just using a regular blender.

So, if you’re a smoothie addict (like me), I highly recommend getting a stand blender. There are many good blenders that are similar to a Vitamix that won’t break the bank.

If you’re only want to puree soups or sauces, or whip up some cream, get an immersion blender. They don’t take up any counter space, are easy to clean, and cost less than stand blenders.

Did I cover everything you wanted to know about cordless hand blenders?

While they’re versatile kitchen helpers, they can’t fully replace your regular blender. If you’re going to blend a lot of tougher ingredients or if you’re going to make large batches for your whole family, it’s better to choose a stand blender.

When you’re deciding on an immersion blender, you can choose between battery-operated and corded blenders. They both have their merits, but most people prefer corded hand blenders.

Cordless devices give you more flexibility, but they’re usually more expensive and have less power than their corded counterparts.

Did I miss anything you would like to know? If you have any questions about blenders, make sure to shoot me a message in the comments section below!