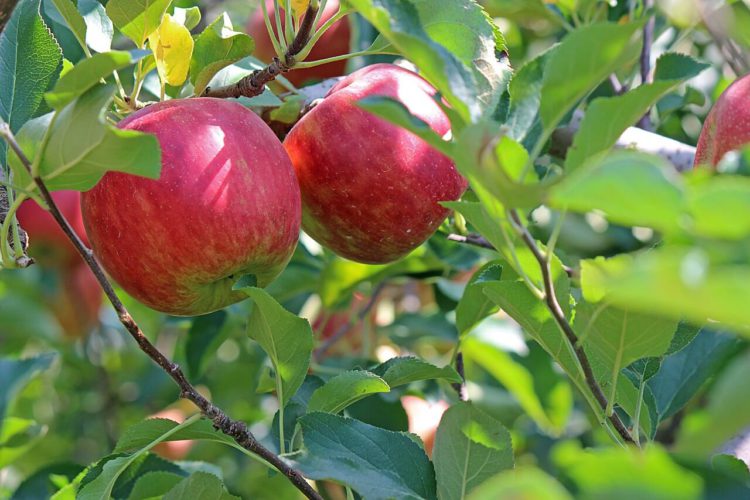 So, is it safe to juice apple seeds? It is perfectly safe to juice a few apple seeds for adults, but it’s safer not to. While it is true that apple seeds contain a potentially toxic substance called amygdalin that breaks down into cyanide, an adult would have to eat over one hundred apple seeds to get a fatal dose.

As with everything else on the internet, there is a lot more to the story. Read on as we slice away the myths to bring you all the facts you need about whether it’s truly safe to juice apple seeds or not.

Is it safe to juice apple seeds? 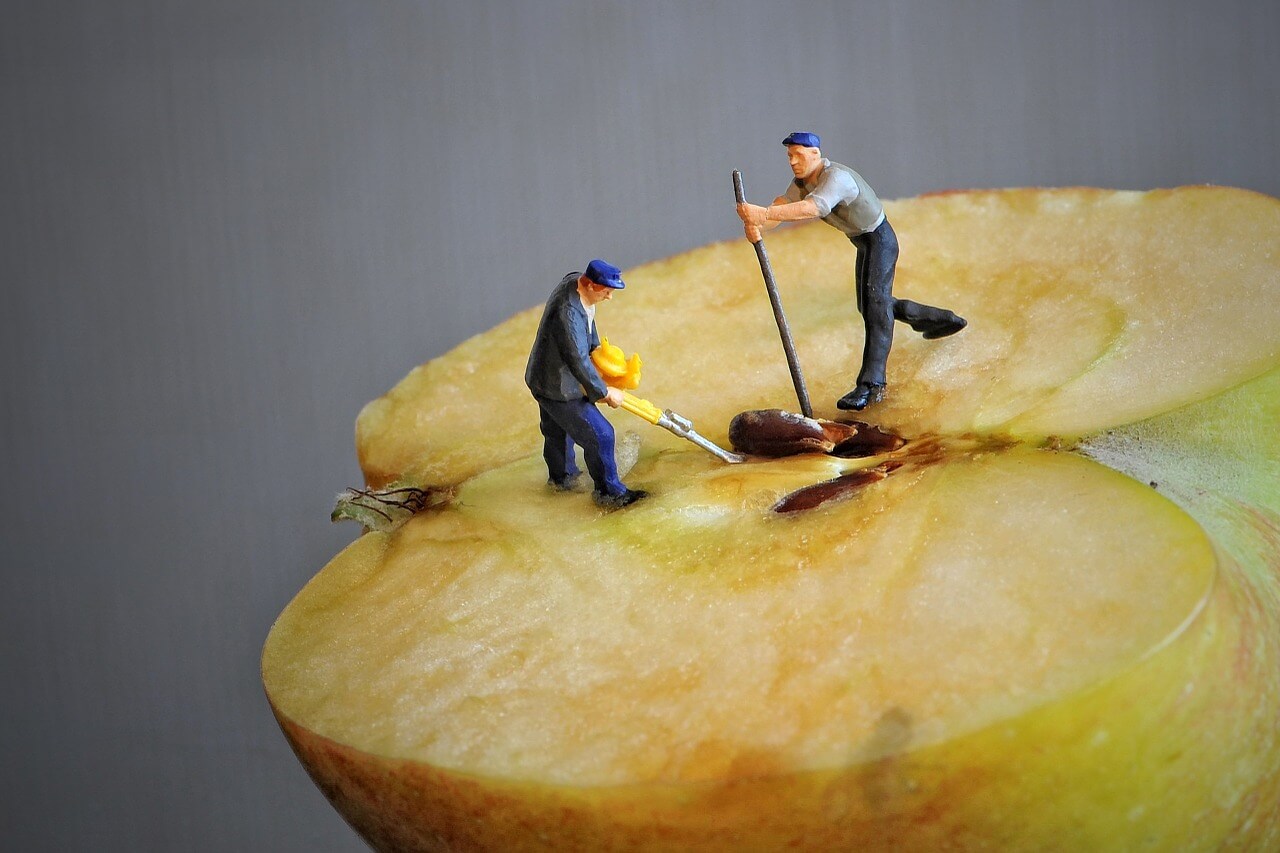 For something so small, it’s hard to believe that it’s managed to stir up such a big controversy. But, as is the way of the internet, one small fact about the chemical composition of apple seeds ended up lighting an entire wildfire of misinformation and panic in no time.

I’ve always known about the dangers of consuming apple seeds. When I was a child, my mother told me that I would grow an apple tree in my belly if I ate them. Obviously, that wasn’t the truth, but I did learn a few years later that the seeds contained a poison.

You can imagine how horrified I was when I first saw my friend happily crunch into an apple core, eating the seeds, stem, and all. As any good friend should, I launched into my tale of deadly poisons and how he better stop that nasty seed-eating habit before he died.

Fast-forward twenty years and lots of research later and I still stand by my horror at seeing others eat apple seeds. But now I know they’re not going to keel over right on the spot. Here’s why. 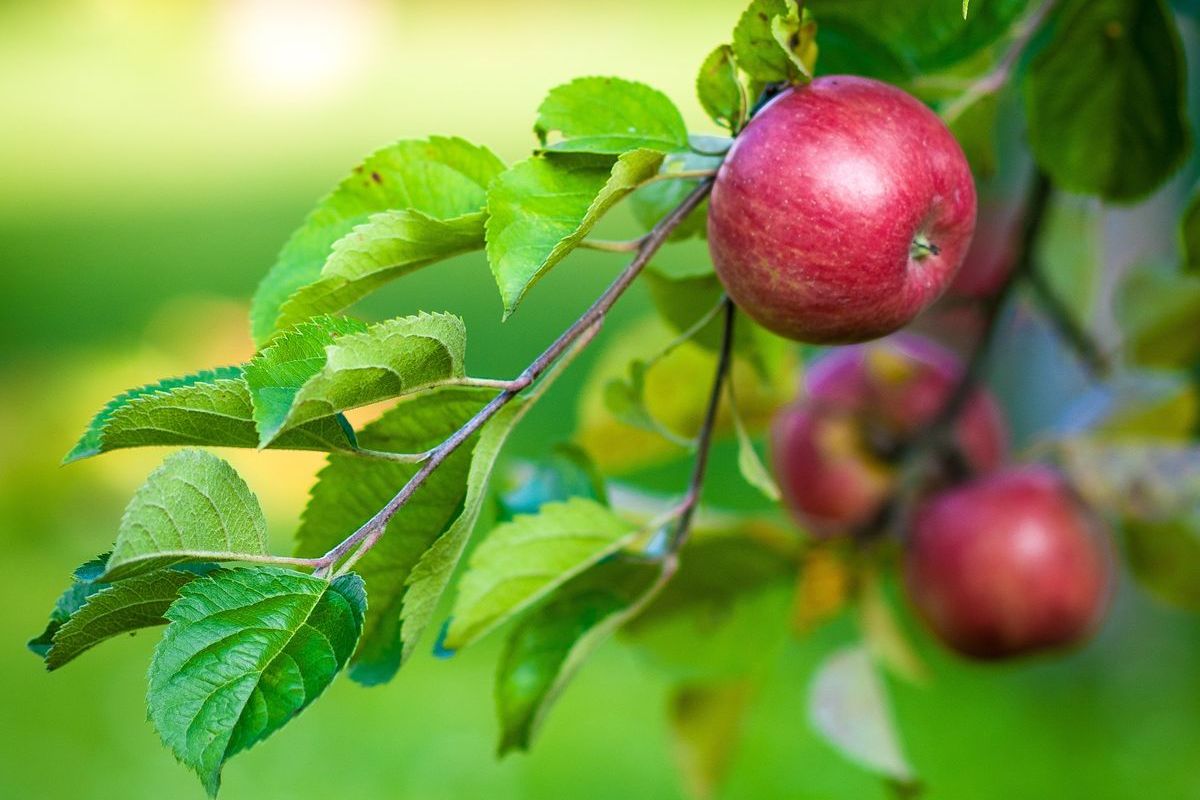 Unless you have an allergy, apples are probably one of the healthiest foods you could ever consume. Whether you eat them whole, cut them up and use them and dishes, or juice them, apples are packed with important nutrients to keep you healthy.

With their high vitamin C content, low calories, and that burst of antioxidants, apples are among the so-called superfoods. Studies have shown that eating apples can help alleviate some of the symptoms of asthma and can help mitigate the problems associated with Alzheimer’s disease. They are excellent for helping manage weight, contribute to bone health, and come with a host of other positive effects.

But what about the seeds?

There is a very small fraction of health aficionados that claim apple seeds have amazing health benefits. I would be remiss in my duties if I ignored the facts. However, please understand that the health benefits of apple seeds aren’t about consumption.

Apple seed oil comes from juicing raw apple pomace and contains a healthy amount of monounsaturated fatty acids. Apple seed oil has been used as a hair conditioner, to help with skin inflammation, and might even be useful as an anti-cancer treatment. More research is needed though.

Because apple seeds are so small and there are so few in each individual apple, their nutritional benefits don’t really have an impact on juicing. That said, they do contain small amounts of iron, magnesium, and potassium. But you can get all of that with other fruits and veggies without also risking cyanide poisoning. 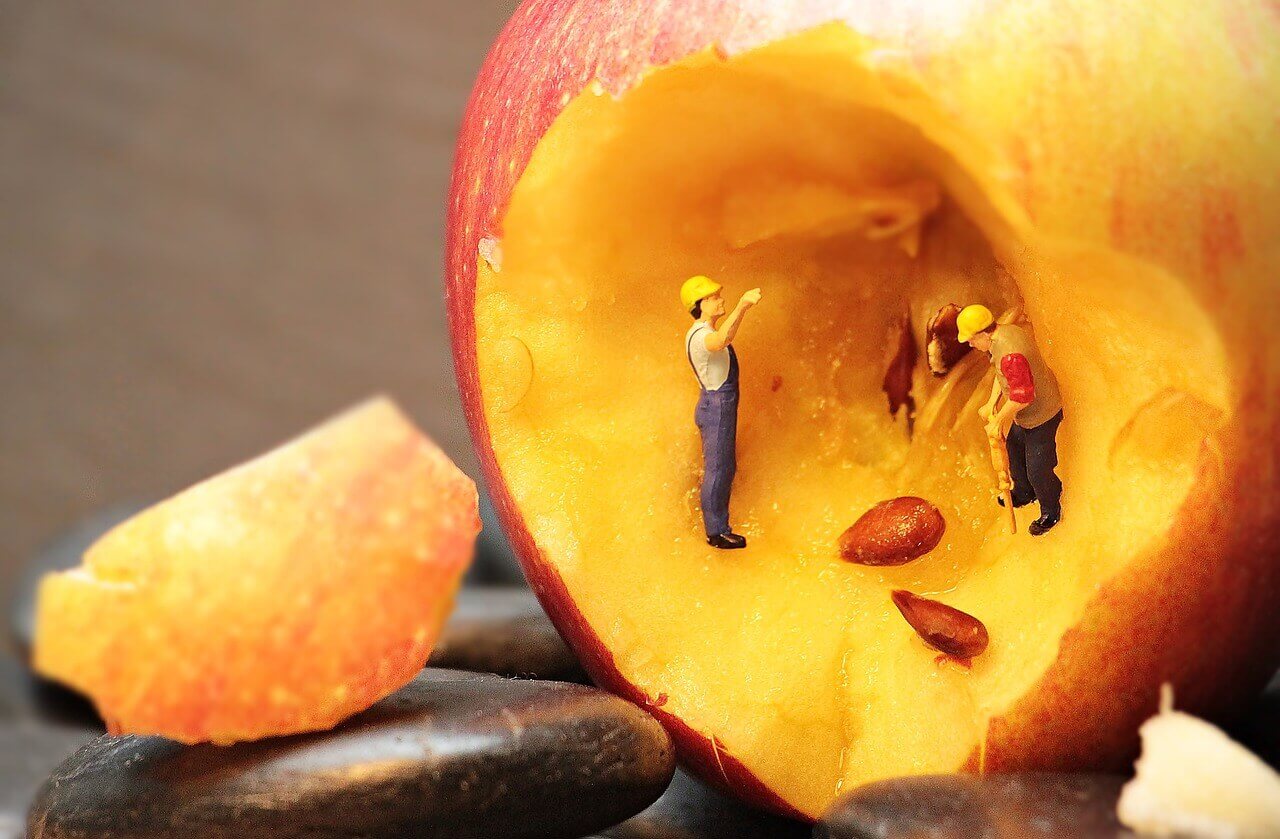 The risks associated with consuming apple seeds are low. Not because the seeds aren’t potentially toxic, but because it is highly unlikely that any single human being could consume enough seeds to poison themselves. But that’s just for regular consumption and swallowing them whole. Juicing is a whole other ball game.

Here are the facts about apple seeds and cyanide.

Most adult humans can safely swallow apple seeds whole. The problem comes in when they chew the seeds or grind them up.

Each seed has a tough hull surrounding it. It takes a little work to chew through that, which is why my friend I mentioned earlier was able to eat an entire apple, including the bitter seeds, without any adverse effects. However, if he had chosen to eat an entire bowl full of chopped or ground apple seeds, he could have easily died.

If you chew through or grind through that hard coating on apple seeds, like you would with juicing or in a smoothie, you will release the amygdalin. Once inside the intestines, amygdalin is converted into hydrogen cyanide.

Cyanide is brutal inside the human body. There is no antidote for cyanide poisoning. If you eat enough chewed or ground up or juiced apple seeds to get cyanide poisoning, you may begin to tremble, become very dizzy, become nauseous and start to vomit, and your heart rate will increase. You’ll eventually have difficulty breathing and may slip into a coma.

If you happen to survive cyanide poisoning from eating apple seeds, you will probably live with heart and brain damage. It’s really not worth it.

Children should never, ever consume apple seeds or juice made with apple seeds. Their bodies aren’t capable of filtering out the toxins.

How to safely juice apples 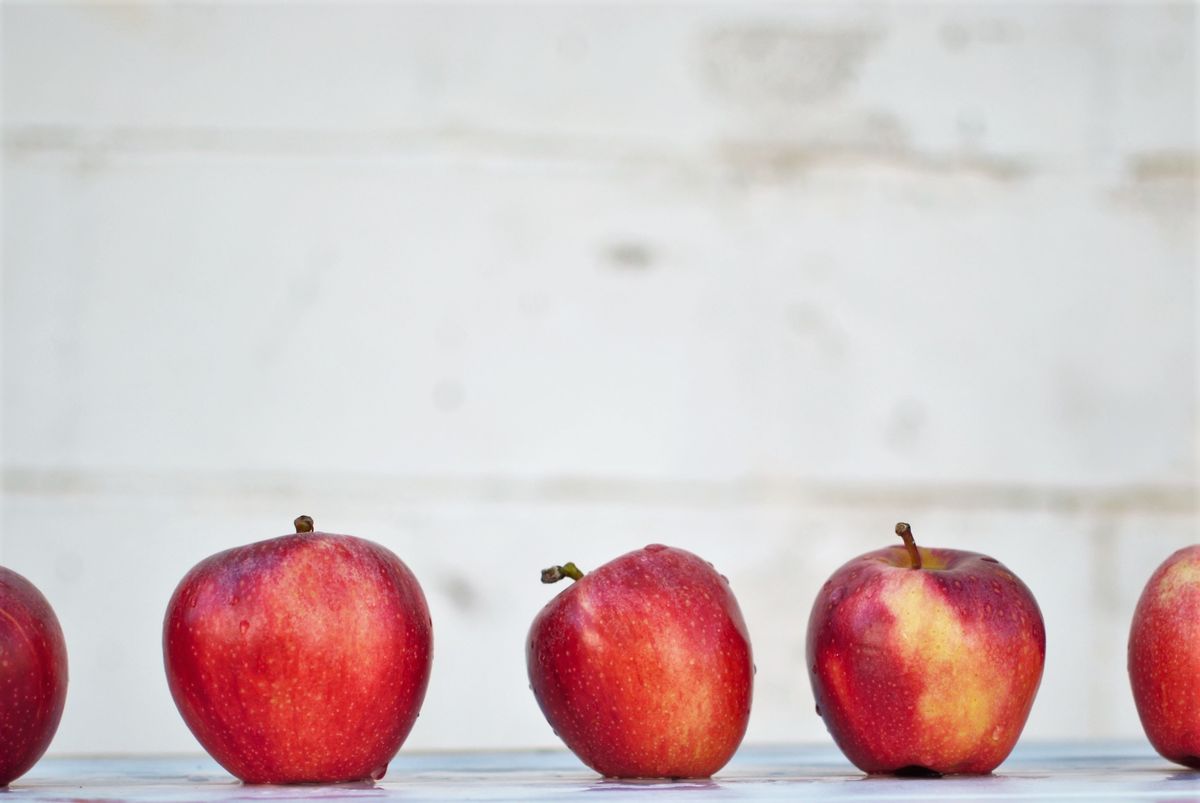 I hope all of this talk of cyanide poisoning didn’t scare you away from juicing apples. Apples add an amazing flavor and boost of nutrients to juice that is hard to find in any other fruits. They also come in so many flavor varieties, it would be a shame not to add them to your juicing rotation.

Here’s how to safely handle and prepare apples for juicing.

Choose your favorite apple variety. Almost any apple variety will do, but you’ll get more juice from certain types. I like Fuji apples and gala apples personally. Sometimes, I add a little zing with a Granny Smith or two.

Gently wash your apples. Even fresh, organic apples should be thoroughly washed before juicing. This removes dust and germs from farmers, produce handlers, and other shoppers.

There is no need to peel your apples.

Core each apple. This will remove the seeds and the tough, fibrous center.

Slice each apple into several pieces. The size of your apple slices will depend on the size of your juicer. Be sure to read the manufacturer’s instructions to find out the perfect size for your specific juicer. Some juicers can handle whole apples!

Follow your juicer’s instructions and feed each apple slice into the machine.

Feel free to add any spices, herbs, or other fruits and veggies to your taste. Sometimes, I like my apple juice straight with no extra additives. Other times, I love adding cinnamon for an apple pie flavor, or even just a touch of organic honey.

Looking for some great juicing recipes besides plain apple juice? Check this out!

So, what’s the takeaway from this article? Apple seeds on their own, whole, are harmless to swallow. Yet, if you chew apple seeds or grind them up or juice them, you will release dangerous toxins into your body. You could suffer cyanide poisoning and damage your body or even die.

A few apple seeds, even chewed up and swallowed, aren’t likely to hurt a healthy adult. But please never allow children to consume apple seeds.

Is it safe to juice whole apples? Yes and no. You can juice an apple or two without getting enough amygdalin to hurt you, but you should never allow children to consume any apple seeds in any form. Even juice.

Is it safe to eat an apple core? Yes, it’s safe to eat an apple core, but you shouldn’t eat the seeds. You can safely swallow whole apple seeds, but once you chew them, you release amygdalin which is then converted into cyanide in your intestines. It’s relatively safe in very small doses for adults, but deadly to children and in larger doses for adults.